Assinins, Michigan is located on the western shore of Lake Superior’s Keweenaw Bay, and is part of the Keweenaw Bay Indian Community. By 1843 a settlement of Anishinaabe families resided there and it is where Father Baraga, later to become Bishop Baraga, set up his church. The settlement is named after Chief Assinins, who apparently was the first individual baptized by Father Baraga.

A photo of Lake Superior Chippewa chiefs including Assinins, who is in the back row, second to the right.

Along with the church, an orphanage was built at this catholic settlement.  When I worked with Catholic Social Services, I read first-hand about the deaths and suffering of native children at the Marquette orphanage. I’m sure the same thing was happening at the Assinins orphanage.

Yet many people must have joyous recollections here. I attended my first catholic wedding of a cousin while staying with relatives in Baraga in 1973 at the chapel, now in ruins and has been replaced by the log cabin structure.

In the early seventies, my mother moved us to Zeba, a native community which is on the L’Anse side of Keweenaw Bay. We often drove around the bay to Assinins to participate in cultural events held there including harvest feasts, pow wows, and services offered at the tribal center.

Assinins was for me a place where I was being introduced to my native culture and heritage. The barn in the above featured painting was the center of many youth and community events.  At the same time, much was in the news about Native activism across the country and I felt part of this in some way, especially when I was in Assinins.

The orphanage was converted to the Keweenaw Bay Tribal Center at this time. Soon after moving to Zeba, my mother obtained a job as the tribal center’s receptionist and operator, a position she held until 1995 during what is now known as the “takeover.”

The takeover occurred during political unrest when some tribal members, many were relatives, occupied the tribal center for about a year. It was a scary time that separated families but also brought together others who supported the occupiers and their cause-Assinins became a thriving community at least for a short while.

The takeover drew many Native activists from around North America. Here is a quick sketch I did of the Oglala actor and singer Floyd “Red Crow” Westerman and photos of relatives:

After the takeover the participants disbanded, and the tribal chairman had the tribal center reduced to rubble. Here is a quick watercolor sketch I did on the site soon after it was demolished.

I moved downstate shortly after the takeover ended, but I did attend a pow wow that was held at the William ‘Boyzie’ Jondreau Field in Assinins before I moved. Here are a few photos:

Whenever I’m in the Upper Peninsula, I enjoy driving through Assinins. When I hunted, my brother and I often parked our vehicle here to search for deer and grouse at the abandoned fields and orchards across the street.

The Catholic church still appears to be active but not sure what else is happening in Assinins. This community has the appearance of another Upper Peninsula ghost town, rich in history but fading into the past.

Please comment below for your criticisms, additions, or corrections to my recollections!

A Photo History of Baraga County 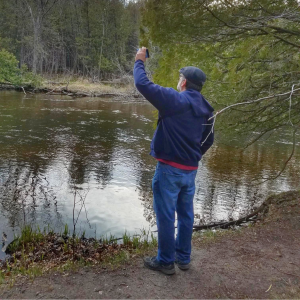